“There’s a reason magic is called whisper, not shouts.” 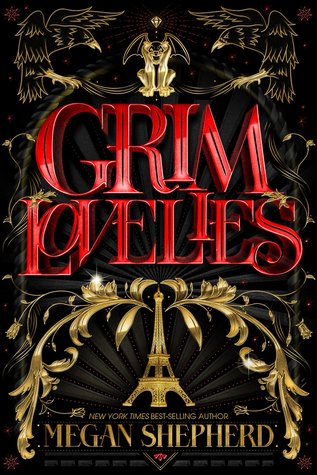 Seventeen-year-old Anouk envies the human world, where people known as Pretties lavish themselves in fast cars, high fashion, and have the freedom to fall in love. But Anouk can never have those things, because she is not really human. Enchanted from animal to human girl and forbidden to venture beyond her familiar Parisian prison, Anouk is a Beastie: destined for a life surrounded by dust bunnies and cinders serving Mada Vittora, the evil witch who spelled her into existence. That is, until one day she finds her mistress murdered in a pool of blood—and Anouk is accused of the crime.

Now, the world she always dreamed of is rife with danger. Pursued through Paris by the underground magical society known as the Haute, Anouk and her fellow Beasties only have three days to find the real killer before the spell keeping them human fades away. If they fail, they will lose the only lives they’ve ever known…but if they succeed, they could be more powerful than anyone ever bargained for.

Typically, the fastest way to get me interested in a book is to tell me there’s witchy content. That’s really all it takes, and suddenly, it’s on my TBR and not long after that, I’m all over it. Which mostly happened with Grim Lovelies (if we pretend I didn’t buy it during Black Friday and let it sit for almost eight months because I didn’t have time, OOPS)!

Following Anouk and her fellow beasties, humans who were once animals and given human life and form by a witch, in the wake of their witch’s murder, Grim Lovelies tears through France on a mission to save the beasties from turning back into animals forever, and losing the family they’ve made during their time as humans. There’s only three days to set things right before all hope is lost, and saving everyone isn’t a particularly easy feat.

This was the part of the book that appealed to me most: the time pressure. I love a book that has a tight deadline, especially one that puts how much time is left in the chapter headers. It really ramps up the pressure and forces the reader to be aware of the sand dripping through the hourglass. It also forces characters to make decisions even when they would rather be patient and think their plans through. If anything, a deadline keeps the book moving forward, and I’ll never say no to this.

I also loved the fact that this was a book with murder and a heist (oh yes, there’s a HEIST), and all of this action happens in the name of fighting back and claiming independence. The witch who created them abused them, and their quest to avoid turning back into animals isn’t to honor her memory so much as it is to look out for themselves, free of any witch’s control.

What can I say? I’m a sucker for characters that take hold of their own lives and pull out from beneath the shadow of someone else.

That said, I think Grim Lovelies suffered from a major flaw, one that really doesn’t work well with found family sorts of stories: its characters are by and large on the shallow side. I liked Cricket (because I’m always partial to wary, clever thieves), and Anouk’s character arc could be charted, but the rest of the characters felt particularly flat, their entire existence revolving around Anouk. I didn’t get the sense they really had any desires of their own, and it made for some dull dynamics.

Additionally, I don’t think the author has handled queer rep well at all. For one, she actively went for a tragic buried gay: he’s in love with a straight boy who will never love him back the same way, and then he dies. It’s possible he’s survived, since Anouk never did see the body, but that said, the heavy implication remains that he was killed, and he is the only non-heterosexual character in the entire book.

There is also a trans girl in this book, and while she wasn’t given as terrible treatment as the single gay character, something about the way she was written felt clumsy to me. Take this with a grain of salt, as I am cis, but the way her gender is explained to clueless little Anouk felt patronizing and stiff, like explaining some curiosity on a shelf rather than a person. I’d be willing to bet that the author didn’t connect with any trans women, and that she didn’t bother to take steps to ensure that the representation she included was well-written.

In short, Grim Lovelies had the potential to be a much, much better book, because it had the strong plot basis. But you can’t rescue flat characters, and it’s hard to ignore poorly written representation, especially when it strays into harmful tropes like bury your gays. I’m hesitant, really, to read Midnight Beauties until I hear from folks who’ve gotten an ARC, or people who end up buying the finished copy, because I want to know if it’s going to keep disappointing me, or if it’s going to genuinely improve on the content in Grim Lovelies.

Witches and heists are great, but respectful representation and fully developed characters are greater. ¯\_(ツ)_/¯