“No woman should be made to fear she was not enough.” 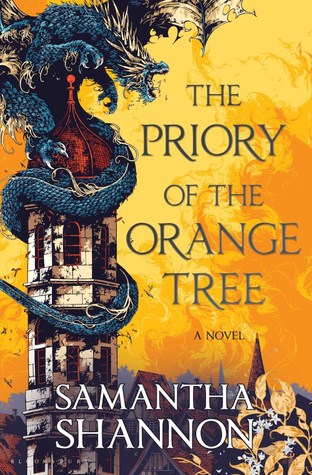 A world divided.
A queendom without an heir.
An ancient enemy awakens.

The House of Berethnet has ruled Inys for a thousand years. Still unwed, Queen Sabran the Ninth must conceive a daughter to protect her realm from destruction—but assassins are getting closer to her door.

Ead Duryan is an outsider at court. Though she has risen to the position of lady-in-waiting, she is loyal to a hidden society of mages. Ead keeps a watchful eye on Sabran, secretly protecting her with forbidden magic.

Across the dark sea, Tané has trained all her life to be a dragonrider, but is forced to make a choice that could see her life unravel.

Meanwhile, the divided East and West refuse to parley, and forces of chaos are rising from their sleep.

This book has it all.

Do you want multiple queer characters? Check! Do you want dragons? Check! Do you want some shade of optimism in the face of the apocalypse, some sense that even when everyone else is resigned there is someone who is ready and willing to do the right thing? Check! And heap on top of that some political intrigue, some magic, and a plot that’s by and large resolved, though it could be returned to in a sequel or a spin-off should the inspiration arise in line with the whims of publishing and the author!

Possibly the thing I loved most about this was Ead Duryan. Sent to Inys to protect Queen Sabran, she’s essential an undercover bodyguard with a mission that’s meant to save the world. As she understands it, Sabran is the blood of Cleolind, the woman who sealed away the Nameless One a thousand years ago, saving the world from total destruction. The Nameless One cannot be freed until Cleolind’s line ends, and it’s up to Ead to prevent that from happening.

Needless to say (and hardly a spoiler, since this is a description from basically the first pages, and I’m sure you’ve read enough books to know nothing goes the way it’s planned), nothing goes the way it’s planned. Falling in love wasn’t part of the plan, for one, and other revelations throw their own wrenches into it all, forcing a major shift in how Ead has to face the end of the world, and who she has to face it beside.

I also adored Tané and Nayimathun with my whole heart. Tané’s POV is one of four major POVs (the others belong to Ead, Niclays Roos, and Arteloth Beck), and the relationship she shares with Nayimathun actually brought me to tears multiple times. Without spoiling very much at all, it’s built on such a powerful display of mutual trust and connection and reverence and friendship that I wept. Folks, I’m not a book crier, but I wept. How’s that for an endorsement, huh?

And some more good stuff about Priory? First of all, this is a non-homophobic world, which is exactly what I like to see. I do wish there had been some explicitly trans characters as well, but two of the four POV characters are explicitly queer (one is wlw, the other mlm), and frankly, Lord Arteloth Beck strikes me as aromantic without 100% on-page confirmation, but I stand by it anyways. Second, the cast is incredibly diverse, as the book isn’t confined to the Elizabethan-inspired corner of the world. Ead and Tané are WOC (to use real world terms and author word of god, Ead is Middle Eastern, and Tané is East Asian), and Loth is black, and that’s just counting the POV characters, not the incredibly large cast of supporting characters that fill out Priory.

I feel like this is the spot where I’m supposed to go into the plot, but oh man, I’m so wary of dishing out any spoilers, even little ones, that I just want to say GO READ IT. And I suppose I should add that even if 800 pages seems daunting, even if adult fantasy tends to read slower, this was well worth it. The four POVs all come together in an incredibly satisfying way, the potential for more work in this stellar world exists (I’d revisit in a heartbeat!), and there’s dragons.

Look, dragons are a huge selling point for me. Of course I’m going to circle back to that.

Basically, if you haven’t read Priory of the Orange Tree yet, I can’t recommend it enough. It’s easily one of the most impressive books I’ve read this year, and despite it being an absolute brick of a book, I’m super tempted to reread it already, and catch all the little plot threads falling into place that I didn’t quite see the first time around. It’s beautifully written, carefully crafted, and bursting to the brim with dragons.