If you haven’t seen Good Omens yet, today’s post is here to convince you of only one thing: you should really think about seeing Good Omens. 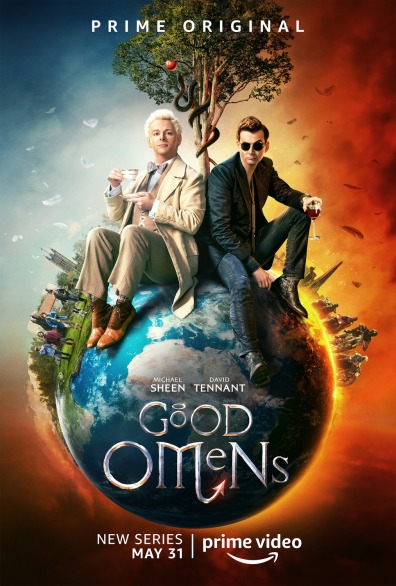 Before I even get into how brilliant this six-episode masterpiece was, can I direct your attention to the stunning intro sequence? Yes? If so, click that link (I’d embed it, but free WordPress is tragically lacking, so you’ll have to do the tiniest bit of extra work for two minutes of wonderful music and delightful animation)!

Anyway, for the uninitiated, Good Omens is based on the book of the same name by Neil Gaiman and Terry Prachett, and it follows the angel Aziraphale and the demon Crowley as they try to prevent Armageddon from coming to pass. Of course, they actually do a whole of lot of NOTHING that actually stops the apocalypse (the honor of accomplishing that goes to other important characters), but their scheming and plotting, no matter how it goes awry, is what makes the story as fun as it is.

Not to mention the fact that Crowley and Aziraphale have what has to be the world’s slowest slowburn going on. 6000 years and some of pining, if my calculations are correct. Even the cast and Neil Gaiman have very clearly agreed that it’s something of a love story (Michael Sheen intentionally played Aziraphale as if in love with Crowley, for one thing), and though there’s no explicit kissing or anything such like, the musical cues, the chemistry when it’s just Zira and Crowley on screen, and even the tone of their arguments drip with romantic tension. Not to mention multiple characters mistake them (but is it really a mistake?) for a couple. It’s subtext so strong that it’s practically outright text, frankly. Also, their ship names include Ineffable Husbands (after Zira’s tendency to refer to the Almighty’s Great Plan as “ineffable”) and Air Conditioning (A/C), in case you needed some of their oddball cosmic comedy in shipping, too.

But Good Omens isn’t just fantastic for the dynamic between Aziraphale and Crowley (though that really is the highlight of the show in many ways). It features fantastic usage of Queen (it’s not explained in the show, but in the book, any music left in Crowley’s Bentley longer than two weeks turns into the Best of Queen album), Frances McDormand as the voice of God and narrator of the show, and a tumbling sense of everything coming together all at once as every string in the story is pulled tight at the same center. It’s an incredibly cohesive story, and even when all the threads seem disparate, it comes together decisively, with a crispness I truly appreciate.

Really, I think its only fault is that the pace seems to slow when the spotlight shifts temporarily away from Aziraphale and Crowley. It’s one part testament to the phenomenal dynamic Michael Sheen and David Tennant have, and one part proof that no one else’s relationships are quite as interesting, even when they are interesting in their own right. That said, the show never really slows down. Every bit of information pushes the story towards its inevitable conclusion, and though I always wanted to get back to Zira and Crowley, I still loved the way the rest of the characters’ stories unfolded and collided!

And now that I think about it, I really appreciate the things this show has to say about humanity and hope and free will in the face of what appears to be the inevitable. I’m in the middle of a period of hating stories that cling to doom and gloom constantly, and for a show about the impending apocalypse, Good Omens never quite succumbs to “WOE IS ME, ALL IS LOST” so much as it clings to “oh, but what if we tried this!”

In short, if you don’t feel like reading everything I’ve got to say, just take away one thing: Good Omens is a phenomenal show, a stellar book adaption, and boatloads of fun to watch! If you’re able to, I recommend it without a doubt, even though it’s hosted only through Amazon Prime (*grumble grumble*). Every minute of it is a delight, and I say this having already watched it twice over.

What else am I supposed to do with my time? Don’t judge until you’ve seen it!

So, have you already watched the show? If you have, what’s your favorite moment? And if you haven’t, think you’ll give it a go some time soon? Either way, let’s chat!

8 thoughts on “Not a Book! Thursday || Good Omens”