As is probably pretty clear by now, I spend a fair bit of my free time watching cartoons. I love them a lot, between the amount of hard work that goes into animation, and the fact that most cartoons are a hell of a lot more positive and imaginative than most of the live action shows available to watch.

Plus, my attention span isn’t always the longest, so episodes that are twenty minutes tops are the best thing ever.

Of course, all this means that Hilda, a new release on Netflix from creator Luke Pearson and studios Silvergate Media and Mercury Filmworks, is checking all the boxes! Let’s take a look at why. 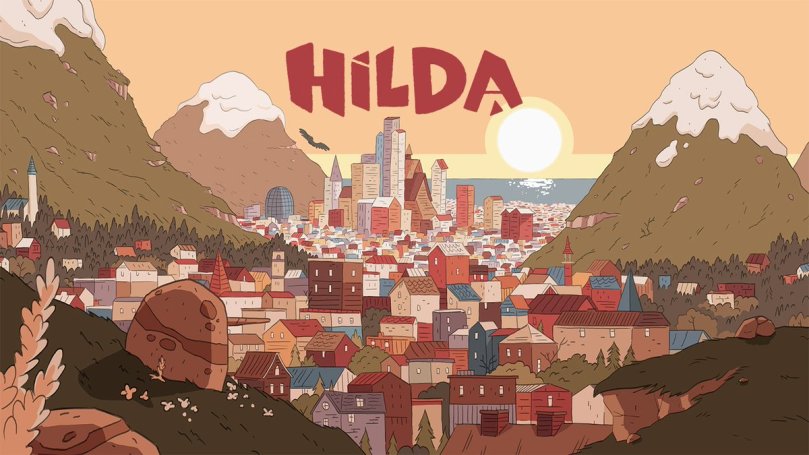 For one, the show’s style is absolutely captivating. With gorgeous scenic views and a lively small city, all presented in a beautiful limited color palette, it’s an aesthetic dream. Just looking at it, even before you absorb any of the plot or the dialogue or characters, it’s incredibly gorgeous and relaxing.

But even better than that incredible appearance is the content of the show itself. It follows a girl named Hilda who’s spent most of her life living in the middle of nowhere with her mom Johanna and her deer-fox Twig.

Anyways, Hilda ends up moving to Trolberg, uprooted from her wilderness life and forced to explore a totally different, much more urban environment. But of course, Hilda is the curious, compassionate, ever-exploring type, and it doesn’t take long for her to make new friends and get into new trouble. Over the course of thirteen episodes, she meets all manner of strange creatures, from elves to trolls to rat kings to woffs, and each time, there’s a new lesson to be learned, and plenty of fun to be had.

I was pleasantly surprised, too, by how serious Hilda could get. It’s not entirely fun and games, since Hilda faces problems in her relationship with her new friends that span a few episodes, but at the end of the day, there’s a hopeful note to it that’s so refreshing and endearing. Not to mention all of the characters feel complex once you’re allowed past the initial caricature of their introductions. Frida, for instance, is more than the highly-organized Sparrow Scout she first seems to be, and David isn’t half as flighty or oblivious as he first behaves.

Best of all, Hilda’s already been greenlit for another season, and I’ve got my eyes peeled for any sign of a release date! It’s cute and quirky in all the best ways, without being shallow or repetitive. The cast does phenomenal work with their voice acting, and the animation team has clearly worked incredibly hard to deliver such beautiful results.

If you enjoy cartoons of any stripe, but especially cartoons that have a fantasy flavor set in what looks like a relatively modern world, I’d recommend giving Hilda a try. It’s charming and enchanting, easy to marathon or to watch in spurts of two or three episodes at a time. Plus, if you have kids, younger siblings, cousins, etc etc, you can absolutely watch it with them and enjoy it together! While it’s absolutely targeted at kids, it’s equally a family kind of show, fun to watch together.

Have you watched Hilda? If you did, what did you think? If not, think you’ll give it a try now? I certainly think you should! Sit back, relax, and enjoy the cuteness of it all. It’s a great way to wind down, and it’s sure to make you smile.