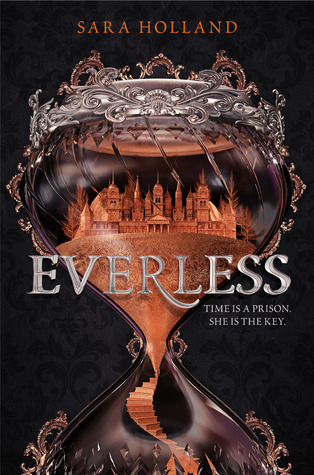 In the kingdom of Sempera, time is currency—extracted from blood, bound to iron, and consumed to add time to one’s own lifespan. The rich aristocracy, like the Gerlings, tax the poor to the hilt, extending their own lives by centuries.

No one resents the Gerlings more than Jules Ember. A decade ago, she and her father were servants at Everless, the Gerlings’ palatial estate, until a fateful accident forced them to flee in the dead of night. When Jules discovers that her father is dying, she knows that she must return to Everless to earn more time for him before she loses him forever.

But going back to Everless brings more danger—and temptation—than Jules could have ever imagined. Soon she’s caught in a tangle of violent secrets and finds her heart torn between two people she thought she’d never see again. Her decisions have the power to change her fate—and the fate of time itself.

When I started Everless, I had a few distinct impressions from the dust jacket summary and blurb, not to mention the cover. I thought it would fit into a more desert-based setting (the cover is a castle in an hourglass; I expected sand!), and I had this idea that it would feel like Victoria Aveyard’s Red Queen, where the main character’s unique and dangerous abilities would be discovered early on, creating a dangerous environment with nowhere to hide.

Everless was not like that, and while defying expectations can sometimes be exciting, this time, my expectations felt much more fascinating than what I actually read. This isn’t to say the book was AWFUL. I just have a tendency to start with high expectations, and this time, it didn’t do my experience any favors.

My prime disappointment was the pacing. Since Jules has the curious power to slow and even stop time, and she tries to hide as a servant in the lion’s den, I thought she would be discovered early on and forced to adapt. Instead, she managed to keep her secret quite a long time, working towards the truth in small steps. It kept the stakes feeling too small for too long, and worse, her journey could have been prevented by eliminating one pesky trope: the “oh no my parental figure was keeping a deadly secret from me and then died before bothering to tell me the truth” trope. Ugh.

It’s my absolute least favorite trope. Absolutely NONE of the book would have happened if Jules’s father had told her the full truth before he died instead of just spouting some cryptic warnings and then conveniently kicking the bucket. That simple. That frustrating. I will never, ever enjoy this trope unless it’s sufficiently modified (ex: a spell blocks the truth, the secrets was never supposed to be important or even harmful, spilling the secret has immediate harmful consequences. etc.), which meant I was really crabby about it here, and that’s no way to enjoy a book.

Another issue was the characters. Jules, Ina, and Caro were interesting to me (Ina and Caro the most, which is a shame to say, because shouldn’t the main character be my priority?), but Roan and Liam absolutely were not, and that was trouble. I should care about the characters who are poised to function as love interests, but here, I didn’t. One brother was too bland, the other too much of a cookie-cutter-YA-bad-boy-he-was-an-ass-to-protect-you sort of figure, and neither one even had that much contact with Jules until the end of the book. Plus, one’s been in love with her the whole time? Lol nah, I’m not convinced. Do better.

But on the other hand, there were a few parts of Everless that really held my attention. For one the plot twists near the end caught me by surprise. I had a guess that was partly on track, but not completely, and the real answer surprised me. There’s a certain satisfaction that I get from being outsmarted by a plot twist, especially when it comes with a “they were telling us the whole time!” moment. The best foreshadowing is obvious (but still visible to the very observant early on) only in that sweet 20/20 hindsight.

I also enjoyed the concept in a broader sense. Time as a commodity, one that can be physically traded, one that can be physically, painfully felt when lost, is such a fascinating idea, especially when the power imbalances come into play. Jules’s anger with the Gerlings and their wasteful habits is so easy to sympathize with, especially after seeing the consequences of those habits on people who can’t afford such waste and luxury.

On the whole, Everless didn’t really meet expectations. It had its moments, its interesting features, but it wasn’t engaging enough for me to be completely enamored with it. At the same time, I expect that I’ll read Evermore when it comes out at the end of the year, if only because the last segment of Everless finally piqued my interest by introducing new conflict and new questions (and a villain potentially more interesting than the hero lol). It’s a conflicting place for me to be in, but I think I’m just interested enough to keep going.

Have you read Everless, and if so, what did you think? Wish you could turn back time and never read it, or that you could speed up time to get your hands on the sequel? Come tell me about it!

5 thoughts on “Everless by Sara Holland”